Report: Meghan Markle Now Refusing To Move Back To The United States While Trump Is President

As far as Trump Derangement Syndrome goes, this takes the cake.

According to reports coming from England, Meghan Markle and her husband are settling in Canada and refusing to move to Hollywood to pursue Meghan’s career until President Trump is no longer president.

READ MORE: Prince William — “I’ve Put My Arm Around My Brother All Our Lives And I Can’t Do That Anymore…I’m Sad About That”

As far as Trump Derangement Syndrome goes, this takes the cake. We knew that Meghan Markle was an unstable and narcissistic loony tunes, but it turns out we may have underestimated the degree to which she is far, far gone. It looks like this is Meghan Markle’s world, and her husband, whose name is escaping me at the moment, is just along for the ride.

However, staunch Democrat Meghan, who has openly been critical of Mr Trump and missed the President’s state visit to the UK last year, has said that she will not move to the US while he is in charge.

‘It’s by no means an immediate thing but there is a long-term plan to end up back in the US with a second home in Canada, where they will also spent a great deal of time,’ the source said.

‘The couple used the words North America in their statement about where they planned to live deliberately. It doesn’t pin them down to any one place.’

An aide stressed that negotiations over the couple’s future were only taking place with the UK and Canadian governments but said nothing could be ruled out.

In 2016, before she met Harry, Meghan called Mr Trump ‘divisive’ and ‘misogynistic’. She pledged to vote for his presidential rival Hillary Clinton and threatened to move to Canada if he won. [Daily Mail]

There have long been signs and omens for Prince Harry. Early on, rumors swirled about her sex life and her career in New York City. She was rumored to have worked as an escort and have slept with two Hollywood bosses in order to launch her acting career. The royal family has strongly denied these allegations.

Excuse while I run to the loo, as the Brits say, to go and evacuate my dinner. Prince Harry is in way over his head, and unfortunately, he doesn’t seem to be aware of how bad it really is. Now, it appears that the spoiled brat Markle wishes to hide out in Canada until “Orange Man Bad” is no longer president, at which point she will gallivant on down to Hollywood to resume her film career. Perhaps Prince Harry will be left sulking at home, looking after Archie? 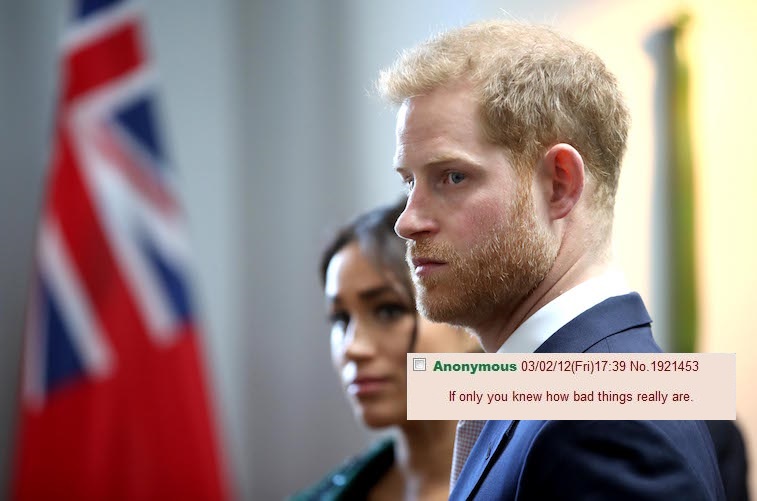 [VIDEO] Dan Scavino Shared an 8-Second Clip With No Sound, That’s the Most Damning Hit to Kamala Yet