Calm down, MAGA Moms! The lad is only 13! Don't start lining up your daughters just yet.

Barron Trump is growing up in the fake news media spotlight, and taking it all in stride and with class. Barron was only 10 when President Trump was elected. Now 13, he’s turned into quite the dapper gentleman.

Donald Trump’s children were dressed to the nines for the president’s glam New Year’s Eve party at Mar-a-Lago.

Barron, 13, who was smartly attired in a tuxedo and black tie, was joined by sisters Tiffany and Ivanka, brothers Eric and Don Jr. on the red carpet for the swanky shindig.

Trump’s children looked on from the wings as their father addressed the press before the party, with the president delivering a strong warning to Iran and laughing off renewed bluster from North Korea.

Though Barron has been a regular attendee at the bash since at least the end of 2014, he stood out on Tuesday following a notable growth spurt over the past year. While Barron’s official height isn’t publicly available, photos show that the teen is at least as tall as his six-foot-two father. [Daily Mail] 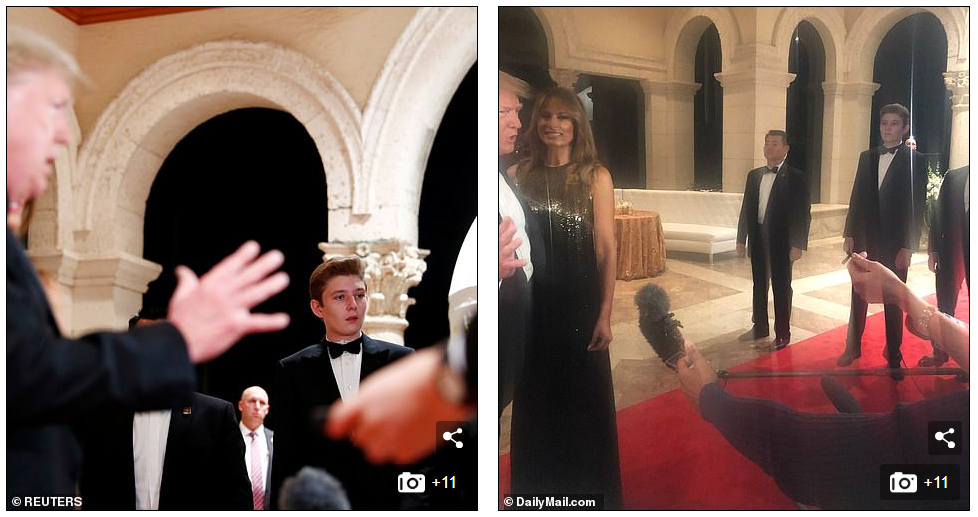 God only knows how difficult Barron Trump’s life has been after being plunged into the spotlight thanks to his presidential father. For all we know, the Fake News has made his life a living hell with their endless hatred and anger towards President Trump and his father. But Barron is showing no signs of strain or stress. He’s handling it all with aplomb and a dollop of nobility.

Dapper thy name is… pic.twitter.com/WHQz03QJbT

“HOW DO I INTRODUCE MY DAUGHTER TO BARRON! TRUMP NEEDS A BLACK DAUGHTER-IN-LAW”

HOW DO I INTRODUCE MY DAUGHTER TO BARRON! TRUMP NEEDS A BLACK DAUGHTER-IN-LAW ??? https://t.co/qMJ5Qr1Iea

“Hey there, Is young Barron Trump Looking like a future President? I think so…@POTUS”

Hey there, Is young Barron Trump Looking like a future President? I think so…@POTUS

“OMG #BarronTrump is quite a handsome young man! We are so blessed to have such an amazing #FirstFamily #Trump #MAGA #HappyNewYear #2020”

https://t.co/URlFEBDp0q
OMG #BarronTrump ? is quite a handsome young man! We are so blessed to have such an amazing #FirstFamily ?? #Trump #MAGA #HappyNewYear #2020 ???

Calm down, MAGA Moms! The lad is only 13! Don’t start lining up your daughters just yet.

In all seriousness, all we ever get from the lying fake news media is a stream of negative news, hatred, and anger. So let’s take a minute to be grateful for our president, his wonderful wife, and the first family, as we kick of this new year. Lord knows, if President Trump was a Democrat, Barron’s handsome face would be on the cover of every tabloid magazine. President Trump has chosen to take on the oligarchs, and so we have to do the job of the fake news media, and spread some positivity and New Year’s cheer. Godspeed everyone, and Happy New Year!

Cheney Calls Out GOP Colleagues: ‘You All KNOW’ Election Fraud Claims Are False

Sen. Johnson Slams Chinese AMB Nominee; You Sure Lab Leak Is Off the table?